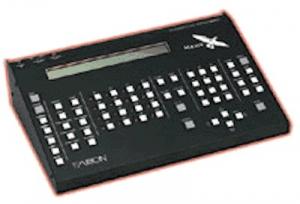 Memory/Leisure-Time Programmer
The Hawk is the latest development in dedicated slide presentation tools from Arion, the world leader in slide presentation products. The Hawk makes elaborate screen effects simple, by storing multiple button entries into memory, that are later released on your command by the press of a single button. Even lightning speed image changes as fast as 1/20th of a second can be precisely performed. Smaller than a laptop computer and armed with an Intel microprocessor, the Hawk has been specially designed to perform the dedicated task of making you and your presentations look exceptional!

If the creative limitations of 2-projector shows are cramping your style, experience the Hawk!
Start small and have plenty of room to grow.
The Hawk is teamed with 2-projector dissolve controls. This modular approach allows you to start with two projectors, then grow to four projectors just by adding a Pro Dissolve or PC Dissolve.

Use your Mirage 700 or 900 Series Dissolve Control.
The Mirage Dissolve Control you already own can be used as a building block to make bigger and better shows. In fact, all Arion dissolve controls are 100 percent compatible with the Hawk. Up to seven Pro Dissolves or PC Dissolvers may be combined with the Hawk and your Mirage Dissolver to make up to a 16-projector system.

Enter the world of leisure-time programming
The Mirage 700 and 900 series programmable dissolve controls are referred to as real-time systems. The term real-time is used to describe the process of synchronizing your slides to music/narration. As you are listening to your soundtrack, you press buttons on a dissolver control. If you have fast moving visuals, you need fast moving fingers!
The Hawk is a leisure-time (also known as memory) programmer. It makes elaborate screen effects simple by storing multiple button entries into memory. These entries are later released on your command by the press of a button. Suddenly the impossible is now possible! Lightning speed screen changes as fast as 1/20th of a second can be precisely performed.

Help is at your fingertips!
The Hawk has a unique built-in Help system that guides you through creating your show. If you are not sure what to do next, simply press the Help button. The display prompts you to make selections such as projectors, dissolve rates, etc. The Hawk is unsurpassed in ease of use and programming power.

Edit with ease!
Since 80 percent of your time is spent fine-tuning your show, editing complex screen effects can be challenging with real-time systems. Because the Hawk stores all the dissolve and timing instructions in its memory, changes can be made fast and easily.

Ample memory for any size show!
The Hawk contains more than enough memory to produce a 16-projector show lasting two hours. Additional memory may be simply plugged in to handle even bigger shows!

Work on multiple shows!
The extensive memory of the Hawk allows you to store and work on more than one show at a time. Or assemble your show in modules or produce slightly different versions of the same show for different audiences. The flexibility of the Hawk makes complicated productions simple!

Built-in memory backup...safe and secure.
The Hawk has its own built-in memory back-up system to protect from losing your hard work. It will maintain your show safely in memory for many weeks.* The state-of-the-art backup system uses a new technology that eliminates NiCad or Lithium batteries typically used in computers. Plus a non-liquid painting process makes the Hawk an environmentally friendly product.
*The duration of memory retention based on the amount of memory in use and the charge condition of the backup system.

Features Galore!
Dissolve Rates
The Hawk comes with a full compliment of 99 dissolve rates ranging from 0 to 9.9 seconds, then even numbers to 100 seconds...more than you’ll ever need.

Repeat
Quite often the need arises to show several slides appearing at the same pace...the same dissolve and view time. The Repeat feature of the Hawk makes this a simple process. Simply select a dissolve rate, view time and how many projectors to use, then tell the Hawk how many times to repeat the dissolves.

Loop
Like the Repeat feature, the use of the Loop feature simplifies animation effects by reducing the number entries required. Creating the effect of a railroad crossing light or a deer running only need be entered once, then simply told to continue for as long as needed.

Another use of the Fade To-Level feature is to control the apparent exposure of different images. It always happens — you have images that appear side-by-side but the exposure of one image is "hotter" than the other. With Fade-To-Level you can control the exposure by lowering the intensity of the "hot" slide to match the other image.

Start/Stop Flash
Creating dazzling animations such as stars twinkling in the night sky are made possible by the Flash feature. The Flash feature is one of the most powerful features of the Hawk because it works with the intelligence of the PC and Pro Dissolves. The commands for the twinkling stars are sent from the Hawk to the dissolvers, freeing the Hawk to perform other tasks. That’s right! You can have a background of twinkling stars while softly fading planets of the galaxy in the foreground—all at the same time! But that’s not all! The entire star background can be faded on and off while the stars continue to twinkle! Animation and dissolves at the same time—imagine the possibilities.

Home
To put that final professional touch to your presentation, the Home feature is placed at the end of your show telling the projectors to return the trays to the starting position, ready for the next performance.

Auxiliary
The Auxiliary feature also lets the Hawk command 12 devices other than projectors. With addition of the Arion Auxiliary Control Module you can precisely time a strobe light to flash with the sound of thunder, or add fog during the sound of a tugboat bullhorn. Using auxiliary devices breaks the mold of the ordinary presentation by adding another dimension to excite your audience for a truly multi-media experience.

Cut your Synchronization Time in half with TCS!
It’s used to produce your local news broadcast and national television programs. Now it’s available to you through the Hawk...Time Code Synchronization (TCS). The Hawk’s TCS system utilizes the video and film industry standard SMPTE Time Code used for editing and synchronizing. The Hawk incorporates the very same SMPTE Time Code to make the process of synchronizing slides to your music/narration fast and fun. With TCS there is no recording required during the synchronizing process, unlike real-time systems. No popping in and out of record, pressing buttons or setting record levels.

Step 1 With your finished soundtrack in hand, record the SMPTE time code onto an unused audio channel, making a single pass from the beginning straight to the end (video pros call this "striping the tape"). The SMPTE time code provides a point of reference to which your images will be synchronized.

Step 2 Program the sequencing of your slides into the memory of the Hawk. With the trays loaded with your slides, the slide sequencing programmed into the Hawk memory and the time code recorded on the soundtrack, it’s time to have some fun!

Step 3 As you start to listen to your soundtrack, the time code is fed into the Hawk. You actually see time code counting in the display. Whenever a slide change is to occur, press the Run button to capture the time code and to place it in the Hawk memory. When the time code is replayed, the Hawk remembers exactly when each slide is to appear.

Convenience Plus!
Besides dynamite programming capabilities, there are a host of convenience features that makes the Hawk a joy to use.

Set Up
Imagine this. You adjust your projectors to get a perfect alignment, and then you reach for the switch on the projector and...oops! Turning the lamp off just moved the projector enough to spoil that perfect alignment. The Setup feature allows you to turn projector lamps on and off from the Hawk keyboard. You even can tell the Hawk what tray positions your alignment slides are located. Setup eliminates the need to touch the controls of the slide projector allowing you to keep your show in line.

Standby
When it’s time for a break, just reach over and press Standby to fade off all the lamps—no need to touch the projector controls. With the added benefit of the power control feature of the Pro Dissolve, you can turn off the projector fans as well. Then press Standby again and return to your show where you left off.

Tray
The Hawk keeps your show in perfect synchronization at all times. But what happens when you remove a tray? Where does the tray get returned? It’s easy when you press the Tray button. It shows a map of where each tray should be located.

Print
A great way to archive your show or to examine timing cues is to work from a hard-copy listing of your show. Any inexpensive serial data printer can be connected directly to the Hawk to list a portion or the entire show.

Forward/Reverse
The Hawk can precisely place any tray at any position. This is great for shows that require tray changes by commanding the trays to 0 position—lift the old trays off and drop the next set on—all without touching the controls of the projector.

Saving Show Programs
The show you have programmed into the Hawk memory can be stored to any media such as audio cassette tape, digital audiotape (DAT), mini-disc, CD-writer, etc. The show program is compressed so the process of saving a 30-minute presentation takes only seconds.

Back to Projection (Arion Corporation)