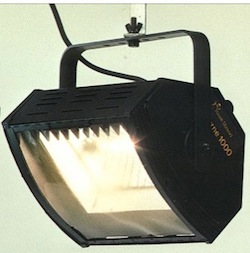 Symmetrical in the vertical plane with an even distribution, wide in the horizontal plane.

There are two models, a 500/200W unit and a larger 1kW unit. Nocturne provides a symmetrical light distribution with extra intensity in the centre for more directional lighting or increased throw.

Journal Entries for Nocturne Flood in the Backstage Heritage Collection