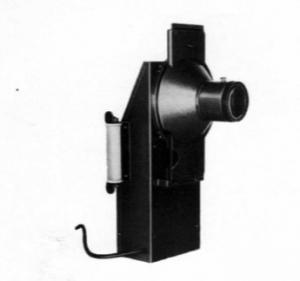 Lightning Flash effect
Description by Hugh Chinnick:
The Blitzgerat contains a light source similar to an electronic flash gun, but is focussable. There is a small neon on the back which indicates when it is charged, and a black button to fire. It can take three slides, inserted in the top, that sit one on top of each other. The middle slide is the one that will be projected. Pull out the bottom slide (there is a notch on the side to remove it sideways) and the other two drop down so what was the top slide is now in the middle position. Place the slide that was removed back into the top and continue the sequence after each flash. By rotating or reversing the slide the lighting image would be different each time. The small white socket is for a 'remote'. There's a wooden handle on each side.
Richard Pilbrow, lighting designer on Blitz! (1963):
It was a flash projector for lightning projection or explosions. I imported several for the production of Lionel Bart’s Blitz! At the Adelphi Theatre. We used them handheld. There were stage electrics crew roving onstage through Sean Kenny’s moving sets (there was no masking) with smoke guns and blitzgerats during the bombing of London sequences.

Back to Effects (Reiche & Vogel)