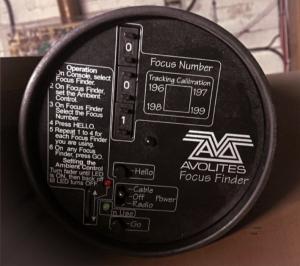 The Focus Finder is a unique development from Avolites. Designed to make setting up easier and less stressful, it won the PLASA product excellence award in 1998. Focus Finder is a tool for automatically defining position Preset Focuses saving time for the lighting designer who can often be focusing generic lights whilst the Focus Finder is in use. Focus Finder uses a simple idea. When a light shines on a light sensor a message is passed back to the lighting console to say, 'a light is shining on me'. Focus finder consists of a Transmitter and Receiver. The transmitter houses a light sensor, user switches and the actual radio transmitter. The receiver connects to the console via a standard cable, allowing positioning at the console, or for very large events outside of the transmission range - on the stage using a standard cable to connect the two. The console moves each fixture in a defined pattern over the stage, eventually the beam of light from the fixture will shine on the light sensor mounted in the Focus Finder Transmitter. This then reports back to the console, initiating a fine search to find the centre of the light beam. The pan and tilt positions are then recorded in the appropriate Preset Focus. You can use a number of Focus Finders because each finder has a set of switches on it defining the Preset Focus number. Additionally there is a 'Hello' switch which sends a message to the console that that transmitter is in operation and a 'Go' switch which is used to initiate focus finding. The complete system has been designed for single person operation, making it ideal for situations where it takes a long time to get to the stage from the console. To complete the user friendliness of the system, when the Transmitter battery is low a message is displayed on the console VGA screen. Standard batteries are used and the life is typically many days of use.

Back to Moving Lights (Avolites)