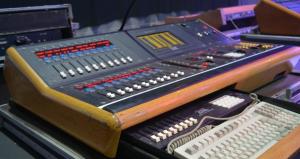 Journal Entries for QM500-TD / QM500T in the Backstage Heritage Collection