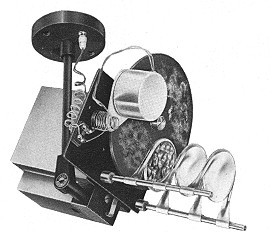 Shown on the right is a combination of the Patt 102 Mini Effects and an optiscope, to make the Kaleidospot.

From Tabs, December 1967 Vol.25, No.4
The basis is a projector version (Patt.102) of the original Patt.100 Minispot. This is only 3.5" by 3.5" square and takes a 100-Watt lamp. In the front runners is placed an attachment, which we have called - for better or worse - an optiscope. This carries a tiny motor driving on the rim of a plastic disc of 4.75" diameter. The disc is black with a random arrangement of small circles in strong and varied colours on it. Two rods project in front, and on to these one can fix one or two patterned glasses and one or two lenses. Six glasses, of plastic in fact, provide six different foundations on which to build. They can also be combined. The effects themselves are produced by the movement of the coloured circles across the broken surfaces of the glasses. The key to the whole result is the amount of in or out of focus used. The glass patterns can be set nearer or further from the disc and the focus aimed at the pattern or the revolving disc. Furthermore the two lenses can be used together to get a wider picture. Thus by altering the position of one lens to another and to the glass or the disc a wide range of differing effects is obtained. All such effects have movement, the rate of change being governed by the diameter of motor drive pulley used. (The Kaleidospot set includes alternative drive pulleys as well as the six patterns and two lenses and all the rest.)

Use of two or more projectors to create a composite picture plus variation in the angles of throw also give individuality to the ultimate composition. Nor need the effects be limited to projection on white screens, back projection onto a wall of glass or plastic bricks gives colourful scintillations to soothe, rouse or madden according to taste.

The whole assembly is, like the Patt.100 Profile Spot and Patt.103 Fresnel Spot, really small and can justifiably be called a Mini-Kaleidospot. Other optiscope attachments have storm cloud, fleecy cloud, rain, snow and flame discs. The last three are fitted with a faster motor drive - in other respects the discs and other bits are completely interchangable. These naturalistic effects will obviously have great value in animating museum dioramas and other of the smaller scale displays which have hitherto been completely unable to use the common stage effects machines for this purpose due to their large size. Where a more powerful light source is required the self-contained transformer 250-watt low voltage tungsten halogen (quartz) lamp projector Patt. 202 can be used.

Back to Lanterns (Patt. Numbered) (Strand)